THE RISE OF LYING EYES – Does the camera ever lie?

On Saturday evening my wife and I had some friends over for dinner. Being non-photographers it was only a matter of time before one of them enquired the most commonly asked question of every photographer. “So, do you airbrush all you photographs then?” I couldn’t help noticing a certain level of distain in his voice. The resulting discussion began with me explaining that the term “airbrushing” was actually incorrect as no airbrushes were used these days but yes I do ‘re-touch’ every image and frankly so does virtually every other photographer in the world working today. The real issue is: Do we think it is acceptable and if we do then why do members of the public have such an issue with re-touching? Its all to do with the morality of changing reality. But isn’t that what cameras and lighting have always done? Isn’t that the very skill that they pay us for?

The term ‘airbrushing’ originally referred to the process of re-touching images with an airbrush directly on to the plate, negative or print with the intention of improving the image (usually a portrait) or indeed adding colour to a black and white original. Until the 1860s Daguerreotypes were hand brushed to achieve the desired effect. The painstaking process often left visible brush marks on the image so the availability of airbrushes, developed especially to do fine flawless paintwork, was a revelation to the industry. The demand for images with no scars, blemishes, or dodgy skin went through the roof and this led, in the late 1800s, to airbrush factories being built to deal with the veracious appetites of the ‘beautiful people’. Suddenly the girl next door could look like Cinderella and so could her ugly sister!

With the invention of celluloid the appeal and use of photography expanded hugely and airbrushing got cleverer and ever more realistic. Greta Garbo graced the screens and the film noir influence spawned a thousand polished black and white faces. But the snap shot was coming to the common man. Eastman Kodak’s Box Brownie originally launched in 1900 enjoyed enormous success for over half a century in various different guises and it was placed firmly in the hands of the ‘amateur photographer’. He couldn’t do any of that airbrushing stuff as he’d bought a camera originally specifically because he couldn’t paint! So we had the first examples of un-retouched images being the norm. From the mid 20s onwards the infamous premiership of the Joseph Stalin introduced the world to the power of airbrushing used to specifically to alter reality. Thousands of photographs were doctored to remove anyone who had fallen from Soviet grace and they were literally airbrushed out of history. This is when it all gets complicated because the market for photography starts to subdivide itself with both amateurs and professionals. The kit became ever more advanced and super specialized with large, small and even medium formats available.

News reporters were, and still are, addicted to the power of the true untouched image whilst fashion, portrait and product photographers do everything they can to bend the photographic art to their creative vision. The social history of respectable re-touching began to take a bashing as a better informed public grew increasingly aware of being sold images of beauty that were not always what they seemed.

It was a company called ‘Hypnosis’, started in the 1970s by the enigmatically named Storm Thorgerson that first captured my imagination whilst training as a graphic designer. Their extraordinary, surrealist work on album covers for bands like Pink Floyd and 10CC inspired me to enter the world of professional photography. These guys were the masters of creative photographic post production and interestingly usually shot with black and white film and added colour by hand for greater control over the finished image. So ‘airbrushing’ or ‘re-touching’ had finally come of age and was accepted as a true creative skill. But there was another great revolution in photography just around the corner. The introduction of ‘digital’ brought with it many disagreements about the true quality of the photographic image and the value of the photographer’s unique skill set but with computer software the possibilities were endless.

In the late 1990s a small box with the name ‘Photoshop’ emblazoned upon it landed on the desk of my Soho studio. I quickly fired up my ‘Macintosh’ computer rippling with the power of a 500 mgbs hard drive and 16 mgbs (count them, 16 mgbs) of RAM. My life as an advertising photographer had changed forever. I had previously spent hour after hour, often late into the night, sitting next to a spotty, B.O. smelling digital artist down at Tapestry. He was tapping away at a half million pound Paint Box machine to interpret my every creative desire. It was painstaking and frustrating work. Now I could do it all from my own desk top only requiring my local lab to scan the chosen transparencies for me and supply a neat hi res digital file. This era sadly spawned millions of would be digital artists who, lacking hard earned photographic skills, would fumble their way through clients briefs like backseat teenagers on a first date. This made it harder for all of us to establish the fact that the best place for a re-touch was with the original photographer.

I re-touched my way through dozens of 48 sheet poster and national press campaigns with that copy of Photoshop 1.00 and will never forget spending days painting detailed masks then applying a filter to process over night with the raw power of 16 mgbs of RAM wurring away. Terms like ‘cloning’ and ‘D.P.I.’ became part of the daily vernacular in my studio and soon we were spending as much time on post production as we were on actually shooting the original image. It was still a luxury though with large fees being charged for the final results and still the independent re-touchers were regarded as the place to go for top end results. Agency discussions about the relevance and requirement for re-touching on a given job were commonplace with the emphasis being on getting the work done ‘in camera’. In the mid 90s the market changed when everybody got a Mac. Magazines were using re-touching on every image and the skin perfect Supermodel was born. Other software brands like Imaginator and Live Picture came knocking on the photographer’s door but the dominance of Adobe’s mighty Photoshop was truly established in 1994 when Photoshop 3.00 introduced ‘Layers’, but they don’t have it all there own way. Programmes such as Portrait Professional now offer great solutions unique to portrait photographers who don’t need the whistles and bells approach offered by Adobe. Finally everything is flexible and corrections can be edited at will by just about everyone.

So going back to my dinner party, over a bottle of Chateauneuf Du Pape, the skin specialist doctor informed me that there are more than 3000 skin diseases and over half of them can effect the face The model explained that every image in her book has been re-touched and the nutritionist assured us that a bit of re-touching works a lot better than even the most perfect diet. The online book retailer was in favour of anything that makes his covers more saleable and the advertising planner just wanted her ads to look the very best they can. (Yes I do have great dinner parties!)

When it comes down to it re-touching is basically just another tool to help the photographer create a better image in the most effective way possible. In this respect it is no different to the choice of composition, lighting, styling or dodging and burning in a darkroom. Whether it’s plate, film or digital the same rules apply. We know that the camera does lie but the essence of photography, it’s U.S.P., is that it is the most believable art form in the world so your re-touching has to be flawless. Post production is not a license to fix your illshotten images. Good retouching has to be relevant, effective but most of all invisible. Ironically, the better the work is the more the public have a problem with it. In my opinion re-touching only becomes a problem if it seeks to mislead the viewer for clandestine purposes and this can be in the hands of an actor’s agent or a political dictator. You can’t ban cars because they sometimes run people over.

Skin softened, tummies flattened and legs lengthened. All in the name of art and commerce. So we are left with a skeptical public who often complain about re-touching because they think it is not a true representation of the scene. That’s until its their own portrait we are talking about…then, of course, a little bit of Photoshopping is always welcome. If people didn’t want to look their best in photographs then there wouldn’t be any professional photographers. Be careful what you wish for!

If you would like to comment on this issue or any others please email Richard at info@rbradbury.com 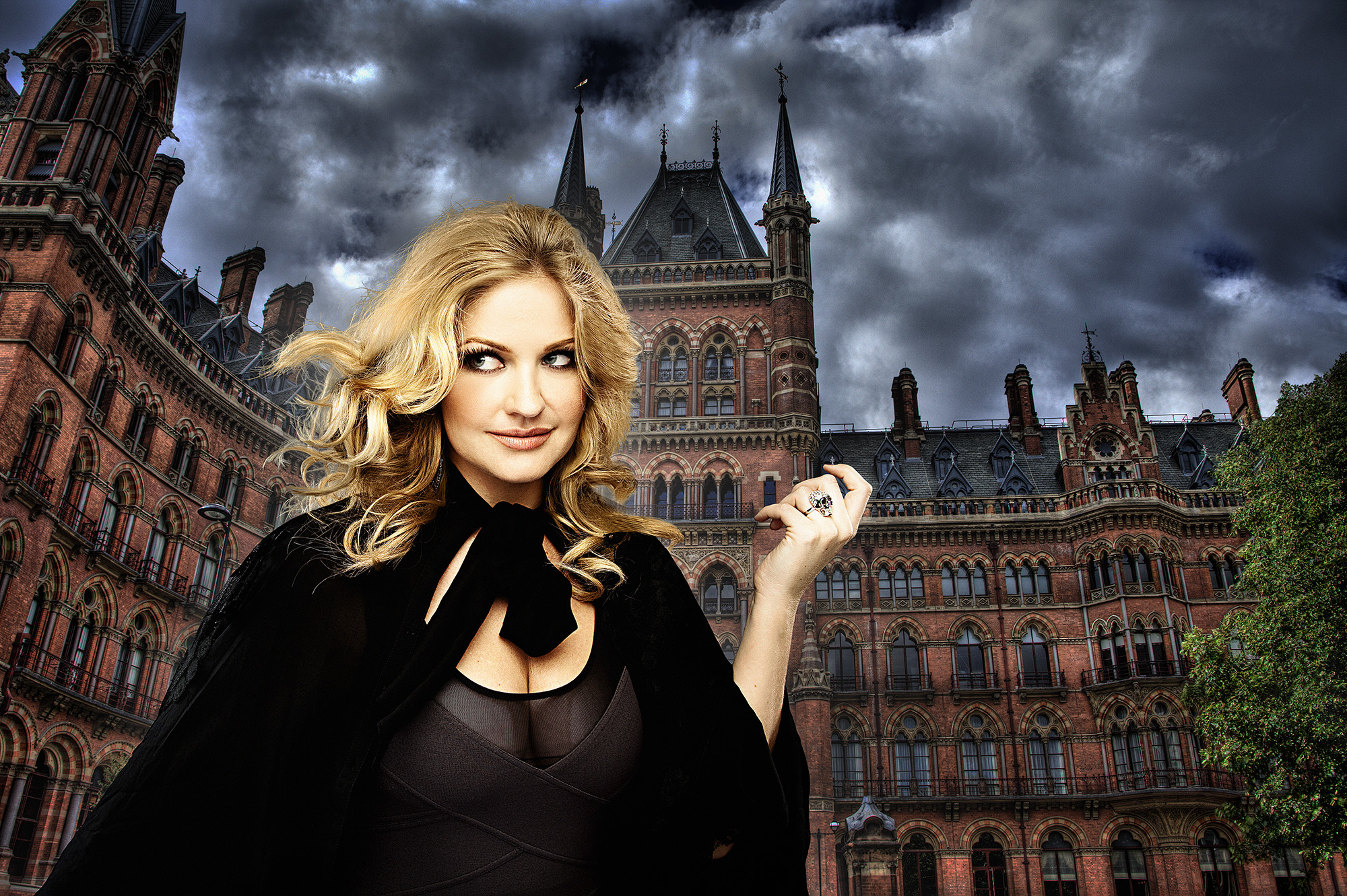